Arrangements of classical compositions for mallet-Instruments and orchestra - concert recording from the "Süddeutsche Rundfunk Stuttgart". 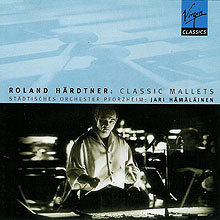 The „Städtische Orchester Pforzheim“ was founded in 1930 and consist of 40 musicians. In 1940 the town took charge of it. After having a difficult start, when it played additionaly in different cities offering convalescent cures, its home is now the local theatre. Besides its stage repertoire the orchestra arranged a series of symphony concerts and plays at special concerts, children's concerts, musical matinées and soirées of the local theatre.

Jari Hämäläinen - Dirigent
Born in Helsinki, Finland, Jari Hämäläinen completed his musical studies in piano, singing and conducting at
the Sibelius Academy in Helsinki and graduated as a concert pianist. From 1985 to 1990, he worked as an assistant to the General Music Director at the Finish National Theatre and, at the same time, as a coach and conductor at the Savonnlina Festival.  He was engaged for the first time in Germany by the Stadttheather Hildesheim in 1990. After engagements in Hildesheim and Braunschweig as Kapellmeister, he became the General Music Director and Music
Director of the Stadtheater Pforzheim. In 2003 he was named Opera Director and Intendant of the Opera.
In 1999 he deputed with the Frankfurt Opera conducting Don Giovanni. He then made frequent guest appearances at the Finish National Opera,conducting Bizet’s Carmen in 2002 and Mozart’s Abduction from the Seraglio in 2004. Under his direction the rarely played opera Mefistofele was premiered at the Theatre of Regensburg in 2005
and was enthiusiastically applauded.
In addition, Jari Hämäläinen has worked with numerous orchestras all over Europe including the Munich Philharmonics, the Stuttgart Philarmonics, the Finish Sinfonia Jyväskylä, the WPR, the Südwestdeutsche Philharmonie Konstanz, the Symphonieorchester Münster, as well as the Thüringer Symphoniker, the Orchestras of Teatro Carlo Felice Genova
in Italy and the Opéra National de Lorraine in France.
Since 2008 he has been the Artistic Director of the renowned Savonlinna Festival in Finland and has conducted operas in Genova, Ireland, Australia, Hawai, Hong Kong, Macau and at the Peking Music Festival.

- „Introduction“ and „Rondo capriccioso“, are played here for the first time with the marimba as a solo instrument, but are originally compositions for violin and orchestra. Camille Saint-Saëns wrote them for the at that time very young virtuoso violinist Pablo de Sarasate and the rondo's spanish charakter was chosen for sure regarding Sarasates spanish origin.


- „Gabriel Faurés Berceuse“ is the first movement of a piano cycle with six movements, named after Dolly Dardac, the stepdaughter of his friend Claude Debussy. It is a cradle song for Dolly and her cat, a litte lyric subtle and tender piece of music, which Roland Härdtner arranged for vibraphone.


- In contrast, Camille Saint-Saëns describes a nightly haunting with his „Danse macabre“, the dance of death (1874). At the beginning, the church tower, played by the harp, strikes 12 times. Then the dead climboff their graves and dance a spooky waltz, which is later terminated by a cockcrow and the new striking of the clock.

- The „Spanish Waltz“ was written by Auguste Durand, a pupil of Saint-Saëns. He was not only a composer and organist like his teacher, but also the owner of renowned music publishing house in Paris. The orchestration of the original piano piece was arranged by Thilo Winter especially for this production.

- The „Ungarische Tänze“ (hungarian dances) by Johannes Brahms belong without any doubt to his most popular compositions. Originally written for piano, the 21 dances became soon orchestrated by various composers and took the concert halls by storm. Furthermore there are arrangements for a lot of different instruments, but definitely new is the one of the „Ungarischen Tanz Nr. 5“ for orchestra and marimba solo.

- Peter I. Tschaikowsky wrote his variations about a rococo theme for violoncello and orcchestra in 1876, a tribute to the very much appreciated Wolfgang Amadeus Mozart. Tschaikowsky's original themes are followed by seven variations, which are made very artfuly and demand a big amount of virtuosity from the soloist while playing them. In order to emphasise the character of the single variations, Roland Härdtner plays the original cello voice partly on the marimba and partly on the vibraphone.


- He plays four mallet instruments at his interpretation of the well-known „Csárdás“ by Vittorio Monti. Followed by a slow introduction played on the marimba, the xylophone starts with the fast dance melody, which is repeated after a quit middle part by the vibraphone and the orchestral bells and then ends the piece temperamentally.

- Gioacchino Rossinis last opera „Wilhelm Tell“ was first performend in 1829 in Paris. Even though the work can be rarely found on todays repertoires, the overture itself enjoys an enormous popularity till today. It has three clearly recognisable segments, which are played by the soloist on changing instruments in order to illustrate the character of each scene. The overture starts with an idyllic description of nature, followed by turmoil and fight against the suppressors and then finally triumph and victory of Wilhelm Tell and his allies.

- The sabre dance from the ballet „Gajaneh“, written in 1942 by the armenic composer Aram Khatchaturian, is a very rhythmic piece of music which is clearly influenced by the folkore of his moher country.

- The „Hummelflug“ from „Zar Saltan“ has a duration of merely 80 seconds and therefore it is the shortest, but the best-known piece from this great opera by Nikolai Rimski-Korsakow.

- The concert faded out with „Nadjas Tanz“, a melody by Wolfgang Schlüter. Originally written for vibraphone solo, it was arranged by Christine Kandert and orchestrated by Hans-Werner Kalcher and so came up the title „Ronjas Tanz“.